Last Monday I wrote about the first 10 Champagnes Ed Mc Carthy (Champagne for Dummies) spoke about for the Wine Media Guild’s tasting and lunch at Il Gattopardo in NYC. The next ten Champagnes were all Prestige Cuvees and it was a very impressive collection.

Champagne Taittinger Comtes de Champagne 2007 The grapes are pressed immediately in presses located in the vineyards. The first pressing, known as the “cuvee” is followed by two more pressings known as the first and second “tallies.” Only the juice from the cuvee goes into this wine. Temperature controlled fermentation takes place and about 5% of the wine is matured for a few months in 225-liter new oak casks. Prior to disgorgement the wine is aged for 9 or 10 years. This is their flagship Champagne. Ed described it as being full and rich.  It was toasty with hints of white fruit, good acidity and a long lingering finish. This has always been a favorite of mine and at $150 it is still a good buy. 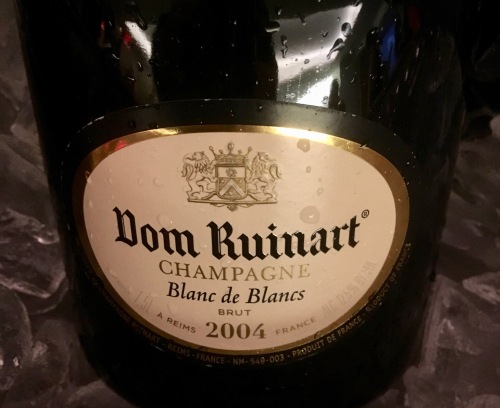 Champagne Dom Ruinart Blanc de Blancs 2004 made from 100% Chardonnay-63% from Cote des Blancs and 37% from Montagne de Reims. This is the 23rd vintage of the Blanc de Blancs. It has been aged on the lees for nine years; its slight sweetness comes from a low dosage. This is an elegant Champagne with citrus flavors and aromas, a touch of brioche and a hint of hazelnuts. In magnum $150 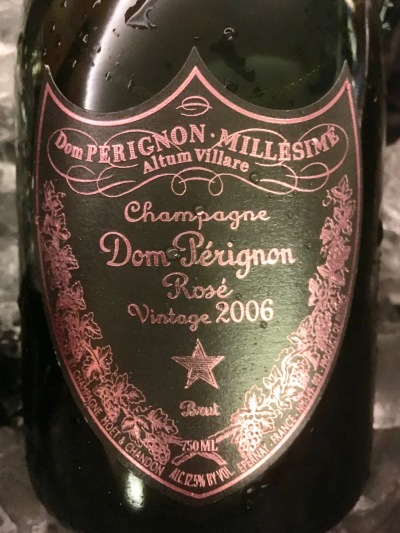 Champagne Moet & Chandon Dom Pérignon Rose 2006 made from Chardonnay and Pinot Noir. Harvest began on September 11 and continued for nearly three weeks. The wine is released 10 years after the vintage. May be the best Rose it has been my pleasure to drink. $335

Champagne Laurent-Perrier Grand Siecle #24 NV made from 50% Chardonnay and 50% Pinot Noir from 3 different vintages 2007, 2006 & 2004). 12 of the most prestigious villages supply the grapes and only the best plots are selected, as are the finest musts from the pressings. The blended wine is aged during the second fermentation on the yeast for about five years. It has tiny bubbles and complex aromas and flavors that make it go very well with food. $150

Champagne Charles Heidsieck Blanc des Millénaires 2004 made from 100% Chardonnay. First vintage was 1983; only four vintages have been made since then 1985,1990,1995 and 2004. The grapes come from 5 major Crus from the Cöte des Blancs: Oger, Mesnil-su Oger, Avize, Cramant and Vertus. This is an elegant wine with hints of lemon, almonds, citrus, toast and a touch of salted butter. Ed said that it was an excellent champagne with surprising weight and power for a Blanc de Blancs $185 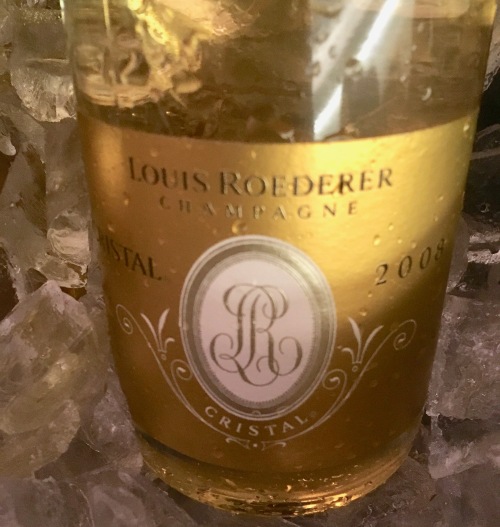 Champagne Louis Roederer Brut Cristal 2008 made from  55% Pinot Noir and 45% Chardonnay with grapes from Roederer’s own vineyards, almost all of which are Grand Cru. Ed said it needs 15 years from the vintage date before it is really ready to drink and I agree with him $250

Champagne Veuve Clicquot “La Grande Dame” 2008 made from 62% Pinot Noir and 38% Chardonnay. Verzenay/Avize are the two dominant crus in the blend of eight grand crus from Clicquot’s own 100% rated Grand Cru Vineyards on the Còte des Blancs and the Montagne de Reims. It has hints of white peaches, apricots and brioche. It needs two or three years from release in order be at its best. $150

Champagne Pol Roger Cuvée Sir Winston Churchill 2006 Chardonnay from their Grand Cru vineyards. The remuage (riddling) is done by hand, a rarity in Champagne today. Ed felt it still needs at least 4 or 5 more years to be ready. He described it as being rich, firm and austere but also with finesse and complexity. Ed said that it was created in homage to Sir Winston Churchill mindful of the qualities he sought in his Champagne: robustness, a full-bodied character and relative maturity. $200

Champagne Bollinger Grande Annee 2008 made from 63% Pinot Noir and 37% Chardonnay. This was one of my top wines. Both Ed and I felt that it would age very well. It is intense, concentrated, rich Champagne with aromas and flavors of toasted brioche..$140

Champagne Krug Grand Cuvée 168th ed  NV made from 45/55% Pinot Noir, 15/20 Pinot Meunier and 25/35 Chardonnay–the percent depends upon the vintage. They blend about 120 wines from 10 or more different vintages and it is aged for at least 6 years in the cellars. All of their Champagnes are aged in used small oak barrels. They are all prestige cuvees made from Grand Cru and Premier Cru villages and are aged longer before release. The overall rating for the vineyards is 98% with Krug’s own vineyards rating 100%. As Ed said, obviously this is not just another NV Champagne. It is Michele’s favorite Champagne. $175

The following were at the event with the Champagnes they represent 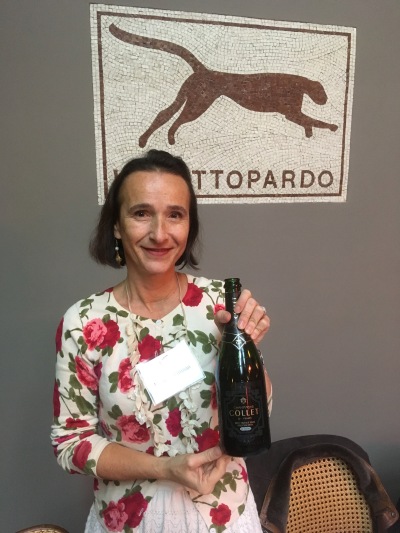 All prices are approximate 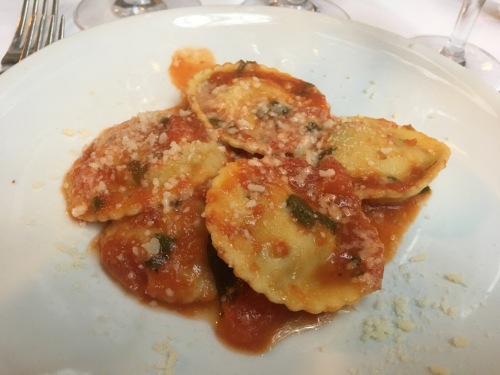 To go with the Champagne we had: Fagottini Pasta filled with eggplant and butter ricotta in a Piennolo Tomato sauce for the Appetizer 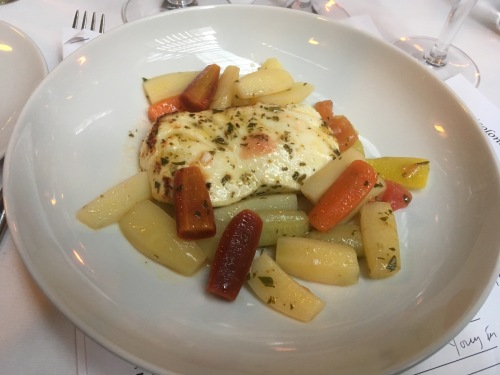 and for the Entrée Hailbut in a “Guazzetto” broth with fresh water vegetables and scented with wild “Finocchiella.”